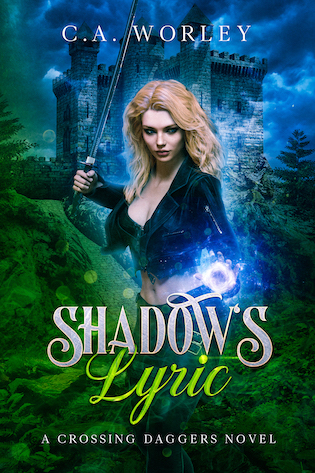 It began with a blood oath.
It ended in bloodshed.

When twenty-one-year-old Lyric is told by her father, Gabrian, she will be crossing into the Otherland as payment for a favor he owes the Shadow Lord, she thinks her life is over. In truth, it is just beginning. Years of training as a soldier and an uncanny ability to learn pretty much anything give Lyric the tools she needs to survive her new reality—and it totally helps that her new lord and master is sex incarnate.

Draven has long awaited Lyric’s arrival, and not just because he needs her to track a powerful weapon stolen by an unknown adversary. He believes he has everything firmly in hand, despite the subterfuge he foolishly agreed to some twenty years back. When Draven’s enemies and lies of omission both threaten the fragile bond he and Lyric are forming, he refuses to allow anything to stand in the way, not even the razor-sharp blade of Lyric’s favorite sword.

WARNING: This novel contains tons of bad language, the occasional smackdown, and a good deal of inappropriate humor–sometimes all at once.

Draven was waiting for me in the hall when I exited my quarters. Something about the way he was casually leaning against the stone, with his arms and legs crossed, made him look especially yummy.

His nostrils flared right as his silver eyes took on an ethereal glow. I turned into a startled rabbit, frozen in his high beams. The oxygen between us heated, increasing in weight. Suddenly I felt hot, my mouth dry.

“I know how we can wet it,” he rumbled, pushing off the wall and crowding my personal space.

In my defense, it was hard to concentrate on anything when Draven was looking at me like he was about to eat me alive.

“Do you have any idea what you did to me out there?” he accused.

“I didn’t do anything to you.”

Well, hello there, nipples. Are you trying to tear through my shirt? Looks like.

“I’m not sure I’ll be able to watch you best them again and again, but that’s exactly what you’ll do, isn’t it, Angel?”

“You—you liked that? It was just me losing my temper.”

I was somebody else at that moment. Someone whose hand had no problem fondling big packages.

“No, it was so much more,” Draven contended.

Despite any misgivings over the Shadow Lord’s intentions, I wanted him with an irrational craving bordering on obsession. I wanted this male I hardly knew. Wanted him enough that I was standing in the hallway, after getting pissed on by a gargoyle, stroking him through his leathers.

We were having a conversation about what I did on the archery range while I was giving him a handy. Damn if I could get my stupid fingers to let go. I knew Draven wanted me. I didn’t understand it, but he’d made it very clear. The proof was throbbing in my palm.

The question was, what was I going to do about it? Probably what I always did when someone pushed me. I was going to push back.

“Did you follow me up here for a quickie, Draven?”

Ohmysweetjesus, I seriously just said that out loud. Another person was inhabiting my body. Probably a prostitute’s ghost.

“What would you do if I said yes?”

My heart sped up, thinking of the answer, picturing it vividly in my head.

“Shield, Lyric. My control around you is tenuous at best, and the images you’re projecting are telling me you’d be more than okay with me locking us up in your room for a few hours while I take up residence in the cradle of your thighs.”

I bit my lip, which I guess was code for go ahead and do me because Draven had me pinned to the wall with my legs around his waist faster than I could blink. So distracted by this exalted male, I hardly noticed the discomfort of my swords getting sandwiched between my back and the cool stone.

“Maybe just a taste, then,” he bade, his mouth so close to mine I was breathing his exhale.

I waited, then quickly realized he was waiting for me to decide. My sensitized skin felt tight. My core ached. I hungered. Gods, how I hungered.

These stirrings had always been dormant in me. One second in Draven’s orbit had awoken the carnal side of my being, the demon side which should have always had an appetite for pleasures of the flesh.

Mateus and the other demons in our clan had no issue finding a warm body for just a night. Getting naked with the humans whose names they’d not remember was commonplace.

I’d grown into adulthood believing I was lacking in this, convinced my halfling chromosomes had dampened those instincts. I had lived in the presence of hundreds of males my entire life and not one of them made me feel any amount of sexual desire, not even Mateus. Only Draven made me feel this way and had since the second I’d stepped into his world.

I involuntarily tilted my pelvis, groaning at the faintest touch of sweet friction. Draven shook, holding himself in check. For me. He was holding back for me.

It was heady stuff having any sort of power over the biggest and baddest Shadow in the land.

My soul pushed energies out and when his magics pushed back, I was lost. I could no more stop this than I could stop a rising tide.

My hands flew to his hair, grabbing two fistfuls. I yanked him the rest of the distance, holding him to me, unable to get close enough.

Unlike our first kiss, this one was raw. Primal. All teeth and tongue and desperation. I loved it. Locking my legs behind his back, I ground against him.

“Have to … make you … come,” he gritted between kisses.

Draven’s mouth drifted down the column of my throat. He kept one hand under my ass and the other slid under my shirt, then under my sports bra. I threw my head back when he reached my nipple, pinching and pulling. All the while he continuously rolled his hips into me.

Shadows started moving around us. Just like in my dreams, they slithered against my limbs, humming with vibrations. I froze.

“Shh. It’s just me,” he whispered, licking my collarbone. “I need your mouth, but I want to taste and touch you everywhere. Let me show you how I can do both.”

His lips were on mine again, the tendrils of darkness taking over his scorching kisses below my ear and down my neck. The maelstrom of sensations obliterated any hesitation I might have had. It was like there were three Dravens making out with me against the wall.

He dropped his other hand back to my rear. Magics skated under my clothing, across my breasts, feeling like electric fingers.

When he started lifting me up and down against his rigid cock, I moaned. The movement was chafing, holding me in that narrow space between pleasure and pain. That foreign storm, the one I’d only ever experienced in my dreams where a shadowy figure played my body like a master, built with the force of a tsunami.

Electric currents slithered down my abdomen, under my pants, and settled atop my clit. Holy fucking shit. They increased in intensity, alternating with his jerking hips. Every part of me was covered in his essence.

The only place he wasn’t was the one place I knew we both wanted him to be. Conjuring the image of Draven moving inside me, imagining his weight pinning me down as he thrust between my legs, the dam finally broke.

I cried out in pleasured shock, unable to hold it in. On and on it went with those electric currents prolonging my ecstasy until I was nothing more than a drooping form Draven had to hold upright.

My body went limp, my head dropping to his shoulder. He was still hard and I wondered if we should do something about that, though, maybe not out here in the hall.

Draven kissed my neck then straightened. Pulling gently on my hair, he tilted my head enough to see my face.

“Passionate. Wild. A force to be reckoned with.”

I blushed hard. Make-out session against wall? No problem. Complement from the Shadow Lord? Total embarrassment.

“Yes, well, you’re nothing like I thought. None of this is, aside from the atmospheric differences.”

He fought a smile. “I’m not sure murdery is a word, but I can be—and often am—all three. Though, not to you, Lyric. Never to you.”

Emotions rolled through me, plucking a haunting tune on my heartstrings. I wasn’t sure I was ready to identify what I was feeling.

He spoke to me as he might speak to a lover. He showed care for me, concern even. He’d fucking bought me a set of katanas and a personalized flask, things I’d treasure far more than any gift of flowers or jewelry.

His lips pressed softly to mine. I knew my shield had been annihilated, so he was catching everything. It was grossly unfair.

“It’s okay, Angel. This was all I needed, for now. You come beautifully, by the way.”

If I flushed any further, I was going to have an aneurism.

Draven lowered me to my feet, brushing back the stray hairs that had fallen out of my ponytail during our hallway tryst.

“You might want to shower and change again, unless you want everyone to know what we were doing.”

Lamerson’s words about my worth got stuck on repeat in my mind. “I don’t want them to think I’m, that I’m …”

I waited for the regret to seep through my pores. When it didn’t, I chalked it up to the endorphins still pumping through me. Surely, I’d regret this by morning.

Draven pushed open my door and nudged me inside. “Then go rinse off, get dressed, return to the training area, and kick someone’s ass.”

Oh, gods. Draven got me. He sooo got me. How could I possibly keep my panties dry when the Shadow Lord was over there getting me?

I was in over my head. 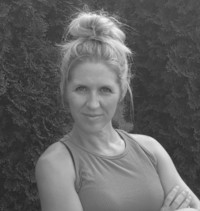 C.A. Worley is the alter-ego of Romance Author Cass Alexander. Where Cass tends to focus on humor in her publications, C.A. loves to write fantasy. She chose to write under the two different monikers so as to not confuse (or tick off) her readers.

C.A. currently resides in the Midwest, but was born and raised in the South. She spends her days working from home and her evenings are spent shuttling her kids to and fro. Her dinners are subpar, but she makes a mean dessert.

When she’s tired of living her sons’ travel sports schedules, C.A. enjoys a glass (or four) of wine. She needs the liquid courage to click the publish button for her fantasy romance novels.

Her motto is, “Be Brave,” and she tries to live it every day. It takes a healthy dose of courage to get through this thing we call life.