Today I am excited to share the release of Historical Serenade: Seven Tales of Romance. This collection of historical romances will transport you from the comfort of your home. For a limited time you can own the digital edition for 99 cents. It is also available for Kindle Unlimited. Learn more, order your copy, and enter the celebratory giveaway! 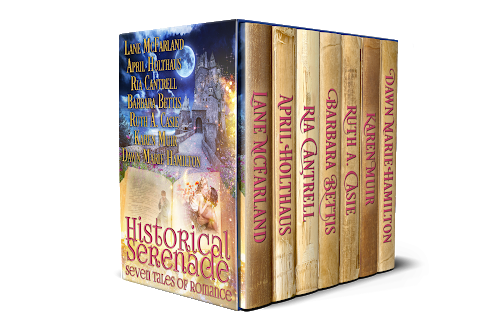 Let them serenade you with their spell-binding tales filled with danger, deception, revenge, honor and passion as we take you back in time on a journey spanning the Medieval Highlands through England’s Golden Age to North Carolina’s Blue Ridge Mountains.

HEART OF THE HIGHLANDS: THE RAVEN by April Holthaus

As the king’s personal guard, Eamon MacLeish’s loyalty has never been questioned until a mysterious lass seeks an asylum for a crime, she claims she did not commit. Adelyn Scott would welcome death over marriage but had no idea her wish would come true when she discovers her husband’s body on the night of their wedding.

As Adelyn and Eamon piece together clues surrounding her husband’s murder, Eamon must choose between his loyalty or his heart.

Seeking revenge again his father, Sir Giles kidnaps the man’s young betrothed, only to find himself thwarting her repeated escape efforts. Lady Emelin won’t let a blasted mercenary destroy her last chance at a home and family, yet when she learns they must track down English traitors, she reluctantly assists. Eluding searchers and enemies like, Giles and Emelin discover that their past goals don’t matter; only a future together will do.

JUST WITHIN A HIGHLAND MIST by Dawn Marie Hamilton

A trio of pesky pixies have plans for Gregor MacLachlan’s heart. While hunting, a wayward shot from his bow nearly hits a strange lass who appears as if by magic. Emily Smith follows a child in her care onto a forbidden mound in the woods and wakes in a strange bed, in a place and time not her own. Can she find love in the arms of the dark-eyed stranger who becomes her champion?

In Medieval England, after Lady Katherine de Grey’s family is murdered, she is rescued by a childhood friend, Sir Richard Weston, and they are forced to marry. Richard resents the edict and intends to petition for an annulment. But, Katherine has other plans. With each caress of her dagger, she empowers herself to fight for her destiny. All she has to do is convince her new husband that the woman he truly desires is already his wife.

TO LOVE AN IMPOSTOR by Lane McFarland

Disguised as Nicholas Barlow, a ruthless, old businessman during the day, the Flintlock Brigand’s leader at night, and Captain Randolf, in between, Nicholas ruins constables who failed to show Bristol’s orphans mercy.

Diana Fleming, daughter of Bristol’s wealthiest gentry, returns to beg her father for help raising of ten orphaned children, but instead discovers her father died because of Nicholas Barlow. Now penniless and desperate, she’s determined to destroy the man who murdered her father.

Tom Callum landed a spot with Celtic Storm as the lead singer and front man. When he reaches Scotland, he is drawn to seek his heritage and uncover the mysteries of his past. He is fascinated with a painting of a girl, Jenna Brandham of the Clan MacCollum, who lived more than six hundred years ago. Jenna tugs at his long forgotten memory. Tom will soon be plunged into a world of intrigue, deception and peril. The past and present collide in an adventure that brings danger at every turn. Only love will give Tom the strength he needs to thwart an attempt on King Richard’s life. Will Tom be able to survive his leap into the past? Will he be able to survive his return to the present, only to leave his heart behind?

THE MAXWELL GHOST by Ruth A. Casie

Traitors, deception, murders and ghosts run rampant at Caerlaverock Castle. Jamie Collins and Laura Reynolds, long-time friends find their destinies intertwined with hidden passions, but all is in jeopardy when Laura becomes the murderer’s next target. Jamie will find he needs some ghostly assistance to save Laura and declare his love. No magic…a love that lasts an eternity.