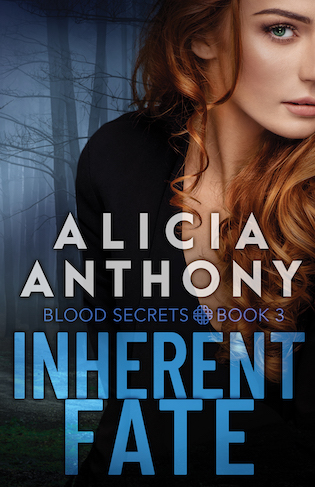 A discarded asset stripped of her identity…

An innocent life hanging in the balance…

Who would you trust if the world was out to get you?

Losing Liv Sullivan in a Bureau operation gone bad turned ex-agent Ridge McCaffrey into a broken man. So when fate reunites him with the woman he thought was dead, he’ll risk anything to make her part of his life again.

Liv Sullivan returned to the States with two goals: end the FBI’s corrupt GenLink psychic intelligence program and reclaim the life it stole from her. But when the case against GenLink exposes a threat against Ridge’s son, the cost becomes too great. Refusing to destroy more lives, she leaves Ridge, and the chance to reclaim her identity, behind.

But as a new generation of GenLink closes in, once-trusted allies become enemies, and long-buried secrets threaten.

Can Liv and Ridge end GenLink before echoes of the past destroy their future?

Inherent Fate is the compelling third installment in the Blood Secrets psychological suspense series. For fast-paced, emotionally intense story lines that keep you up past your bedtime, and intricate plots laced with romance, this award-winning series is for you.

Book 3 of 3. Series is best enjoyed in sequence.

The unmistakable thunk of a body. The involuntary exhale of someone having the wind knocked out of them–female, if Ridge had to guess–was audible even from the window side of his hotel room.

“Christ, Evan, watch yourself.” Tony’s voice, loud and unmistakable, filtered from under the doorway as Ridge moved toward the door. “She’s not the enemy.”

Tightness gripped Ridge’s chest and he pushed the desk chair out of his way, toppling it to the floor as he brushed past.

“This was your choice, Olivia.” The words stopped him cold–the chill of the metal door handle colliding with the heat of his fingers sent a spiral of anxiety up his spine.

“You knew there’d be consequences. You can’t change your mind now. It’s too late.”

Ridge pushed the balloon of air from his lungs and rested his forehead against the faux wood veneer above the peephole. He forced reason to join the ranks of uncontrollable hope that swelled in his chest.

“No one ever said this would be easy,” Michelle continued. Only she and Tony were visible from Ridge’s fishbowl view.

“Let. Me. Go.” That voice, those words punctuated by restorative breath, stole every fiber of logic from Ridge’s body. He swung the door open and stepped into the hall.

His breath caught as he met her gaze. Real. Tangible. Here. A thump of blood rushed against his eardrums, silenced by the breath of her name sliding across his lips. “Liv.” 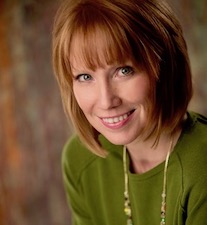 Alicia Anthony’s first novels were illegible scribbles on the back of her truck driver father’s logbook trip tickets. Having graduated from scribbles to laptop, she now pens novels of psychological suspense in the quiet of the wee morning hours. A full-time elementary school Literacy Specialist, Alicia hopes to pass on her passion for books and writing to the students she teaches.

A two time Golden Heart® finalist and Silver Quill Award winner, Alicia finds her inspiration in exploring the dark, dusty corners of the human experience. Alicia is a graduate of Spalding University’s School of Creative & Professional Writing (MFA), Ashland University (M.Ed.) and THE Ohio State University (BA). Go Bucks! She lives in rural south-central Ohio with her amazingly patient and supportive husband, incredibly understanding teenage daughter, two dogs, three horses, a plethora of both visiting and resident barn cats, and some feral raccoons who have worn out their welcome.

When she’s not writing or teaching, Alicia loves to travel and experience new places. Connect with her on Facebook or Instagram @AliciaAnthonyBooks. She’d love to hear from you!