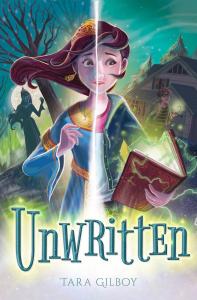 In 2018 I was given the opportunity to read an e-arc of Unwritten by Tara Gilboy.  Unwritten is a story about Gracie, who knows that she is a character from a story but doesn’t know much more than that.  Frustrated with a lack of information she takes it upon herself to find out more, which sets a number of adventures in motion.  Throughout the story Gracie has to face many facts and situations that teach her who she is.  She gets to learn more about her story and how it lines up (or doesn’t line up) with who she believes she truly is.

Recently I had the opportunity to talk with Tara and ask her some questions about her writing process, Unwritten and its upcoming sequel.  It was lovely to get the opportunity to communicate with her and I’m definitely looking forward to checking out more of her stories in the future.  Check out her answers below and make sure to give Unwritten a read before the sequel comes out!

Q| What do you enjoy about writing children’s books?
A| Everything! Middle grade novels are my favorite books to read, and I think that’s why I am so drawn to writing them. Most of all, I love the playfulness and freedom of writing for children. As children’s book authors, we can write about wizard schools and chocolate factories and talking animals and fairy tales come to life…. As long as we are telling a good story, we are only limited by the bounds of our imaginations. No concept is too far-fetched or magical. I also love how full of hope and wonder children’s books are. As adults, we get a bit more jaded, I think. And I love how children’s books focus, first and foremost, on storytelling. Child readers don’t put up with long passages of purple prose; everything unnecessary must be pared away. Kids want exciting, well-thought-out plots and strong characters they love (or love to hate).

Q| What inspired the concept of Unwritten?
A| Because of the premise of the book, people often assume I must have started with the “story-within-a-story” idea, but that actually wasn’t the case. At the time I started writing Unwritten, I kept having this recurring nightmare where some sort of supernatural entity was coming after me, and I had to pack up whatever I could fit into my car and run away. That dream was initially my starting point in the story; in the early drafts, the story opened with a stranger arriving in the middle of the night and telling Gracie and her mother that they have to flee. (I think my original opening line was “The pounding shook the house” as this stranger knocks on the door.) Later, as I continued working on the novel, I realized that in order for readers to feel invested in that moment, they needed to know more about Gracie first, so the scene got pushed back into what I think is now chapter four or five, and it eventually evolved into something completely different. But the origin of this story was me exploring who Gracie was running from and why. That same summer, I was spending a lot of time at my dad’s cabin in northern Wisconsin, and I would jog every day in the woods up there. I noticed the woods reminded me of a fairy tale setting, and I started thinking: “what if Gracie was trapped in a fairy tale?” In the early drafts of the book, Gracie actually did travel into the fairy tale Sleeping Beauty.

Q| What are some of your writing rituals? Do you have certain things you do before sitting down to write or brainstorm?
A| I always need some sort of caffeine: coffee in the morning, or tea in the afternoon. If I am stuck, the best thing I can do before I sit down to write is to read a novel I love for half an hour. It always puts me in the mood to write and gets the creative juices flowing. If I am writing, I am usually on my laptop, and when I’m brainstorming, I do it with pen and paper, on cheap yellow legal pads. I have a nice desk, but I never sit at it. I’m usually writing on my couch, often with my dog, Biscuit, in my lap.

Q| I’ve heard that Unwritten will have a sequel, how long of a series do you hope it will be?
A| At this point, I’m not sure! I just finished a draft of the sequel, which will be titled REWRITTEN, and I know I definitely have ideas for a third book. Based on what happens in REWRITTEN, there are definitely more stories I want to tell about Gracie. Right now, I hope there will be at least three.

Q| Do you prefer to outline first, or dive right into your first draft?
A|  I used to not outline at all. I am a terrible outliner. When I outline, my writing suffers for it because I find I am always trying to force characters to do things that don’t seem natural for them simply because those actions work for my plot. So I used to write my first drafts without an outline. However, that takes a really long time, because when you write without an outline, you end up throwing A LOT of pages away and having to rewrite a lot. Now I kind of do a combination of writing and outlining. I start writing, then I might stop and outline the next couple scenes, write some more, make changes to my outline, write some more, and so on. I may have a general idea of where I am heading, but I usually don’t know my climax and ending until I get there. The climax of REWRITTEN came as a complete surprise to me up until the day I actually wrote it. There is a quote, I think by E.L. Doctorow, who says “Writing is like driving at night in the fog. You can only see as far as your headlights, but you can make the whole trip that way.” That’s how I feel about outlining. It only works for me if I outline a teeny bit at a time. When I proposed REWRITTEN to my editor, I had to create a detailed outline of what the book would be about, and of course, most of it changed by the time I had finished the book. I was a little nervous to break that news to my editor, but thankfully she liked the changes I made!

Q| What are some of your favorite writing tools that you can’t live without?
A| Coffee, legal pads, and purple pens. I don’t know why, but I love writing in pretty colors!

Q| Do you have any other series or stories you are working on?
A| Right now I am focusing on REWRITTEN revisions, but I also have some other story ideas I’ve been playing with. I was working for a while on two stories: one was a YA about these kids who went to a school run by a group of philosopher-scientists, and the other was a historical middle grade about a mermaid. They’ve been sitting in the drawer for a while, but I hope to one day bring them out again. I’d also love to try writing some nonfiction.

Q| Do you have any advice for aspiring writers?
A| Read a lot, write a lot, and find a workshop group full of people you trust. It will be your most valuable asset as a writer. They should love your work but also push you to make it better. I have a very difficult time developing a revision plan on my own, and my critique partners are always helping me, by closely reading my work, suggesting what needs to change, and also helping me find the “gems” in my stories – the best parts that I can flesh out more and bring to the forefront. The people in my workshop group have become some of my dearest friends, and we are always cheering one another on, commiserating one another on failures, and chatting for hours about storytelling. They are the best! I don’t think I could have written this book without their support. It can be tough to find the right workshop group, though. My number one rule is this: you should always leave a workshop session feeling energized and excited to get to work on your revisions. If you feel dispirited and discouraged, something may be off about the dynamic of the group. They shouldn’t be giving only praise, but they should definitely be telling you what you are doing WELL along with what needs to change. And that’s not just because of ego or hurt feelings. There is no way a writer can successfully revise without being aware of what parts work well and resonate with readers. Those are the parts we want to expand on and strengthen.
—

Tara Gilboy holds an MFA in creative writing from the University of British Columbia, where she specialized in writing for children and young adults. She teaches for San Diego Community College District and is the author of Unwritten and its sequel REWRITTEN, which is forthcoming in spring 2020. You can find out more about her at taragilboy.com.
—
Once again, a huge thank you to Tara for taking the time to answer my questions. Please make sure to check out her book and future projects! Happy reading!